Plant disease issues are faced by the agricultural community each year in some shape or form.  They are caused by bacteria, viruses, nematodes, Fungi, and fungal like organisms.  However, disease development is an event that requires several components.  Furthermore, the development of disease at levels that significantly reduce yield loss is determined by multiple factors.  In this post we will discuss disease development and impact on yield, with a specific focus on foliar diseases as examples.  These concepts will hold true for other diseases and crops as well, but the specifics will differ.

The development of disease in plants requires the presence of three factors, a susceptible host, an environment that is conducive to the pathogen/disease, and an appropriate pathogen.  Disease only occurs when all three components come together, and the amount of disease that develops will depend on the length of time that these factors remain together.  In plant disease the most common visual aid used to describe this is the disease triangle.  I’ll switch it up and use a Venn diagram, just to keep things fresh. 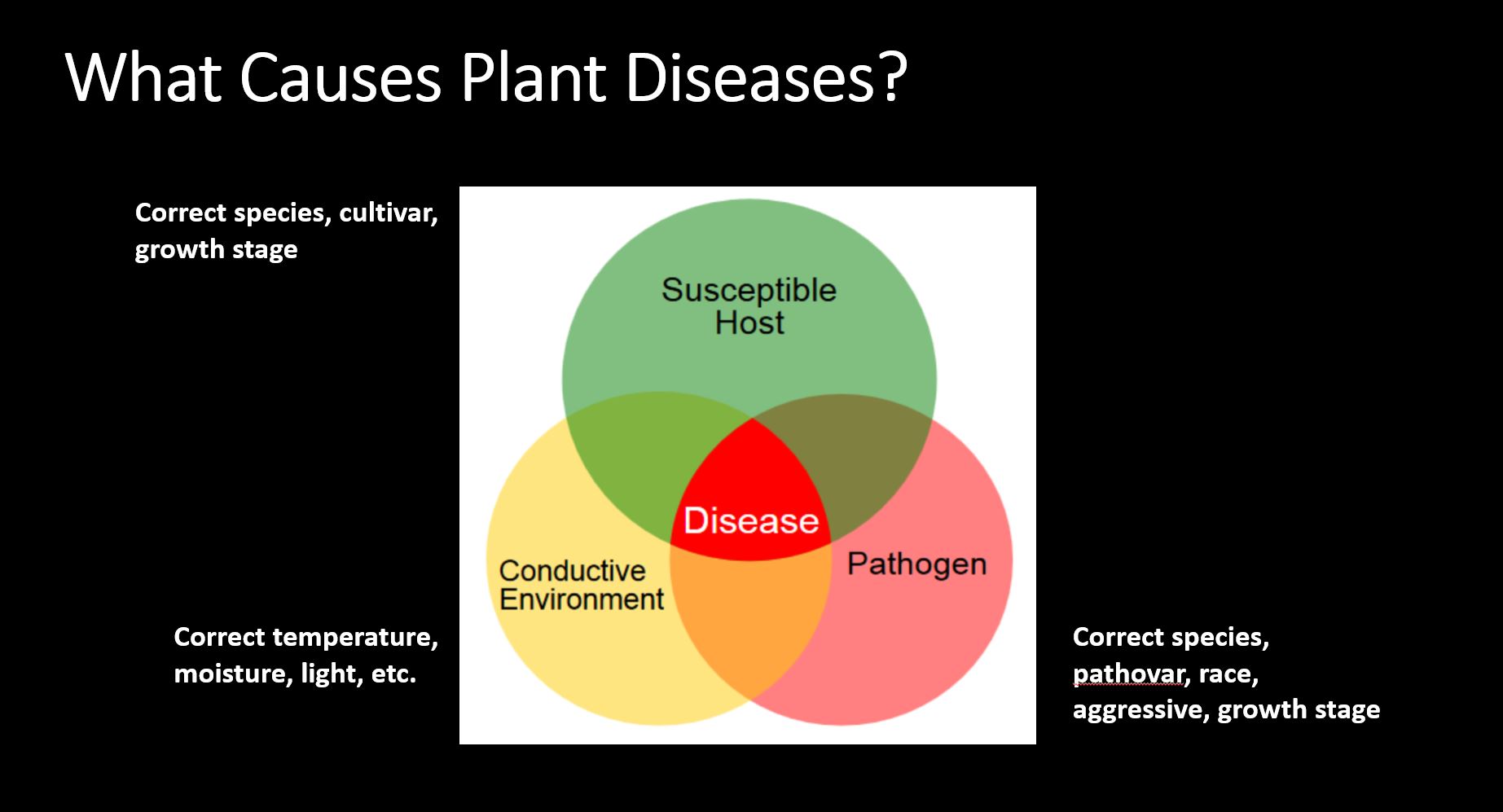 Plant pathogens require a host for nutrition, growth, and development.  However, the host must be the correct host and it must be susceptible to disease.  What does this mean?

First, many pathogens only cause disease on specific hosts.  For example, Cercospora sojina causes frogeye leafspot on soybean but does not cause disease on corn.  The reason for this is complicated, but is ultimately related to evolution of the pathogen and the host.  The pathogen uses various means to recognize that it is near or on an appropriate host and following the correct sequence of events, can infect.

The second part is that even if the host is the correct type, it needs to lack resistance to the pathogen in question.  Plants have many preformed and induced mechanisms of resistance, and can recognize the presence of pathogens or their activities in several ways.  If the host contains resistance to the pathogen it may prevent infection or spread, slow disease development, impact reproduction, or have several other effects on the pathogen that reduce or inhibit disease development.

The third part is that  the host plant needs to be at the appropriate growth stage.  Some pathogens, for example Colletotrichum graminicola, the causal agent of corn anthracnose, typically infect foliage of corn at younger stages due to differences in waxes and other leaf chemicals in leaves.  Others only infect specific plant organs or tissues.  For example, Fusarium graminearum in wheat can only infect after heads have emerged.  It cannot infect leaves, even if conditions are conducive for disease.

Pathogens have optimal growing conditions, just like everything else on the planet.  In order for disease to develop the conditions need to favor pathogen growth and development.  These include the correct temperature, humidity, light quantity and quality, and other factors.

Remember that not all organisms are pathogens.  For example, Fusarium is a genus of Fungi with many members that can cause diseases on a range of hosts, and many members that are simply saprophytes, feeding off of dead decaying materials.  Similarly, Fusarium virguliforme causes sudden death syndrome on soybeans but does not cause disease in corn.  In addition to being the correct species, the pathogen has to be at the correct growth stage.  For example, some pathogens only infect when a particular spore or structure is formed.  If the pathogen is dormant, it will not infect a susceptible host.  Still in other cases the particular genetic makeup of the pathogen may impact it’s ability to infect and cause disease.  In some pathosystems, for example the rusts and powdery mildews, a race structure exists.  Different races can cause disease on a host that contains specific resistance genes, because the pathogen has evolved to defeat these resistance genes and their products.  The pathogen must also be virulent, or able to cause disease on the host in question.

Although most people would love to have crops completely free of disease, this is not possible.  Even under so called “disease free settings” some level of disease invariably exists on the crop; however, the level of disease is not resulting in measurable or statistically significant yield loss.  We use the term significance to indicate that a replicated study has been conducted, and that statistical analyses have been conducted that allow us to have a degree of certainty that treatment effects were not due simply to chance.  Therefore the goal of disease management is to keep the level of disease underneath the economic damage threshold.  This threshold is the level of disease needed to cause a resulting yield/quality loss that would be recouped by an in-season management practice, such as the application of a foliar fungicide.  Once this threshold is met or exceeded, the use of a fungicide would result in profitable disease control.  If this threshold is not met, the amount of yield protected would not cover fungicide application costs.  In the figure below, the blue line represents the increase in disease of a hypothetical pathogen under ideal conditions if not managed.  The green line represents that same disease if concepts of Integrated Disease Management are implemented. 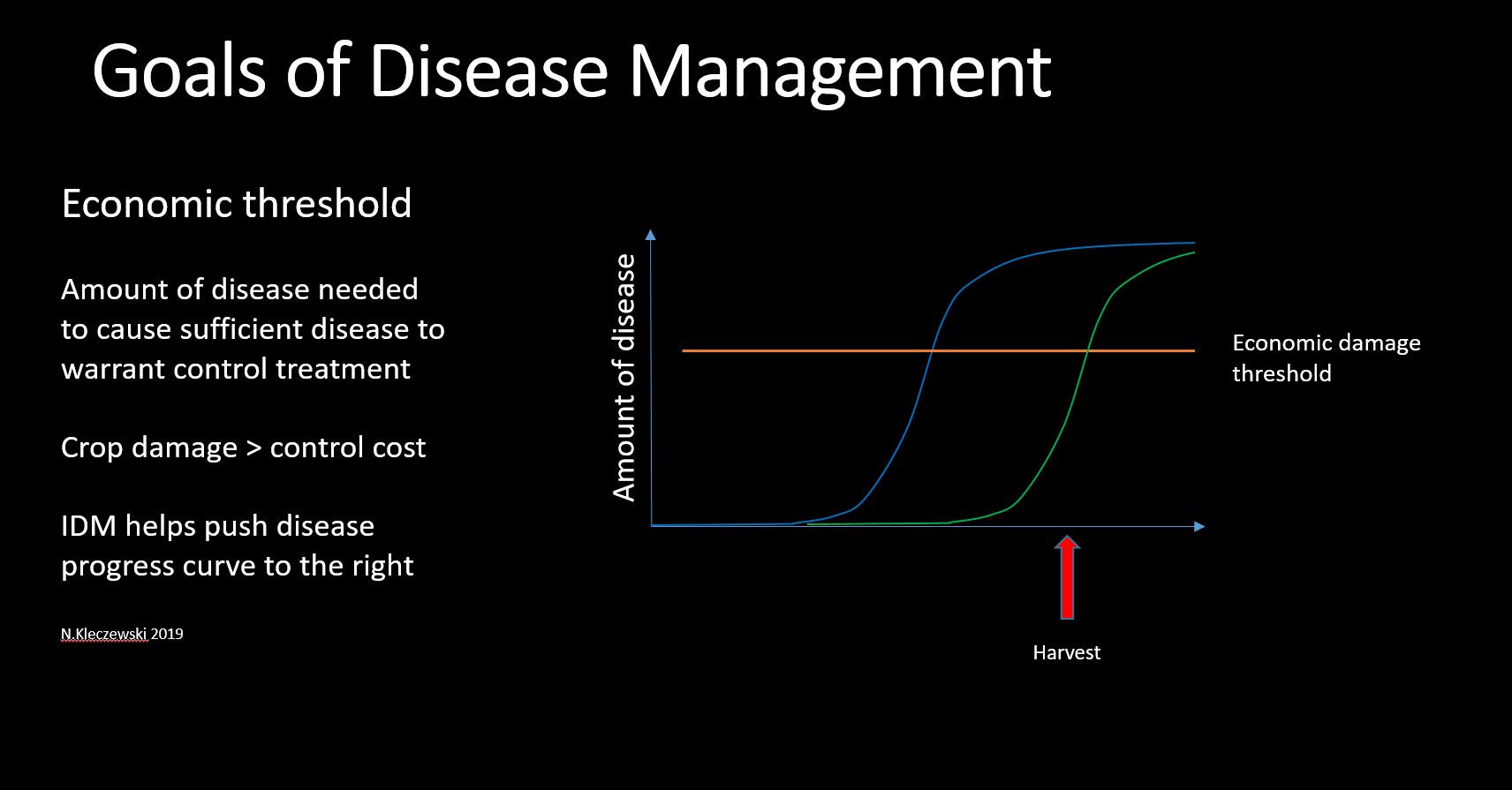 In order to effectively and profitably manage diseases, we want to push the disease progress curve to the right, thereby reducing overall disease levels.  To accomplish this we utilize various integrated management strategies that include cultural practices (e.g. tillage, crop rotation, irrigation management, planting date, balanced nutrition), cultivar/variety/hybrid selection (more tolerant or resistant to commonly occurring diseases), chemical inputs (fungicide use if needed based on environment, hybrid, field history, and/or disease presence relative to some point in crop development), and biological control (using natural enemies or similar to reduce the pathogen or it’s effects).  The more aspects of IPM are used, the less overall disease will develop relative to a non-managed field.

The final thing to keep in mind with diseases, especially ones affecting foliage, is that when the disease starts is very important.  For example, in corn, disease onset prior to VT might necessitate a fungicide application for diseases such as southern rust, tar spot, and grey leaf spot.  However, if disease does not start until later in the season, for example R4-5 the majority of yield has been made, and the overall impact of disease will be lower.  Southern rust and tar spot are excellent examples of this phenomenon. 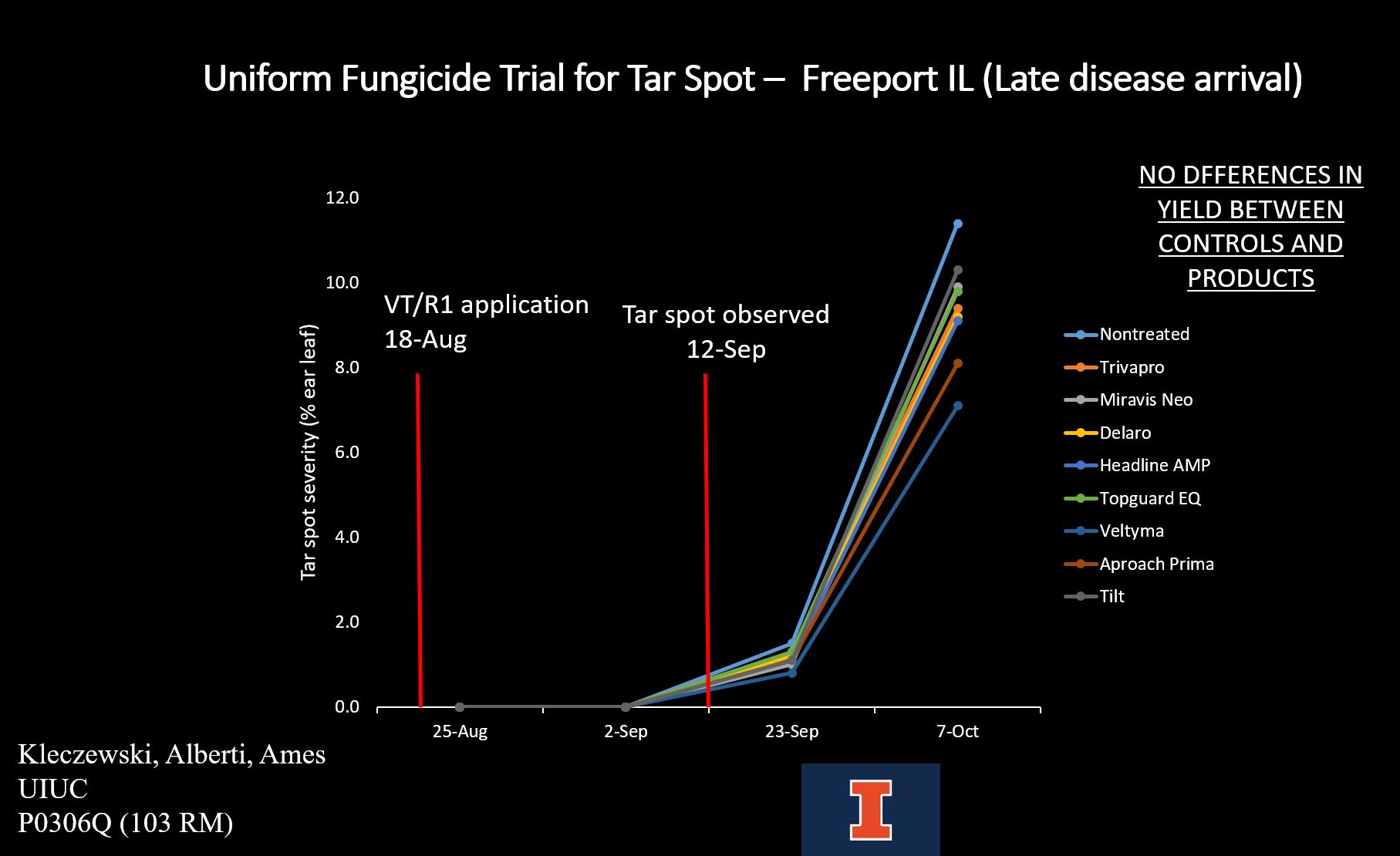 In the example above,  tar spot developed in the canopy after R3.  Consequently, the residual effects of the fungicides were most likely what resulted in the separations between products and the non-treated check.  However, just as importantly, even though there was disease (approximately 11% in non treated checks) this level of disease was not sufficient to provide a significant yield response by fungicides.  However, if the pathogen arrived earlier in the season and conditions remained conducive for disease, not only would the total amount of disease by harvest increase, but the amount of disease during critical periods of grain fill (VT-R3) would increase.  Thus, we would expect to see greater yield protection and significant differences between fungicide-treated and non-treated checks.  Another way to think of these data is that in this particular case, application of a fungicide at VT didn’t provide a profitable means of managing tar spot. 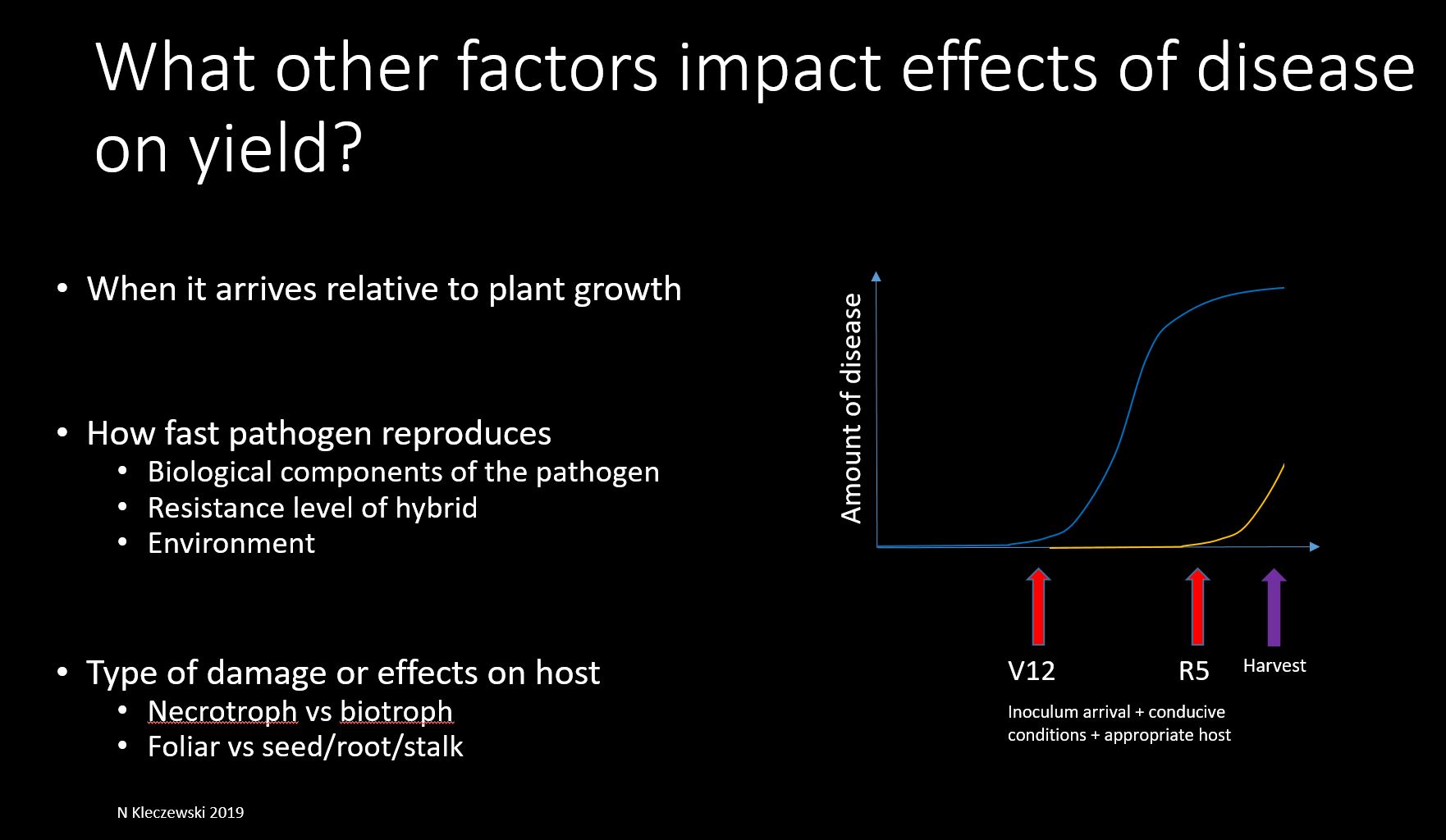 Other factors also impact yield in addition to disease onset.  For example, the rate of reproduction affects how fast disease progress curves build over time.  The part of the plant damaged, as well as the lifestyle of the pathogen (needing a living host to grow vs able to grow on dead tissues) also are extremely important.

Keep these items in mind when viewing plant disease management data during meetings this year.  When you understand what makes pathogens and disease “tick” you can better make use of the data presented.

Keep an eye out for southern rust

Remember- the tar spot pathogen can survive the winter